Cynthia Newberry Martin talks about TIDAL FLATS, the story of a marriage at the crossroads, being obsessed by relationships, being a debut author, writing, and so much more. 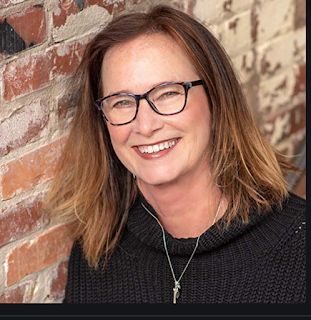 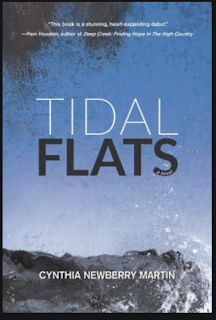 Cynthia Newberry Martin is the author of The Painting Story, placed on the Short List for Finalists in the novel category of the 2010 Pirate’s Alley Faulkner Society William Faulkner-William Wisdom Creative Writing Competition, and at the same time, the second novel I wrote, Between Here and Gone, placed as a Semi-Finalist. She tells us: So far, all in drawers instead of stores, but I say: Hey, you won PRIZES for them.

Her new novel TIDAL FLATS is the story of a marriage, the family a wife wants (and her husband doesn't), and what time and separation do to people. And it's incredible. Just look at these raves:

“Cynthia Newberry Martin is a tremendous writer, with a Woolfian talent for taking the full measure of small moments. Her work is both subtle and revelatory, and I’ve been waiting a long time for this book.” –Rebecca Makkai, author of THE GREAT BELIEVERS

“I admire Martin’s capacity to render her characters with the dignity of complexity. And I double-admire that she takes that same care with her settings, turning Place into a player that has its own ‘human’ heart. The novel swirls with light and love.” –Joshua Mohr, author of SIRENS and DAMASCUS

Thank you so much for being here, Cynthia!

I always think a writer is haunted into writing a book. Is that true for you? What was the question you were desperate to answer?

When the youngest of my four children left for college in 2012, I had had children at home for 31 years. I was restless, past ready for a different life. I had started talking to my husband years earlier. I told him I wanted to spend some of my days near water, but as the years went by, what I wanted specifically was this: to spend a week a month in Provincetown to write and breathe the New England air. On the first of these monthly trips in January of 2013 (and I’m writing from Provincetown now, toward the end of my seventh year of these trips), when I sat down to start writing Tidal Flats, the question I didn’t even know I was desperate to answer was whether two people who want different things in life could make marriage work.

Cass’s past scars her and impacts her present—and her future. For her, her parents and their life seem to be replaying in her. Do you think we can ever really escape that? It feels to me that even understanding our pasts doesn’t stop them from encroaching on us.

I think the more determined we are to escape our past, as Cass is, the more we run right into it. It’s like when you tell yourself not to think about the elephant—and then that’s all you can think about. And even if we manage not to run right into it, when we pause and look back, there it is. Instead, if we face the past and acknowledge its place in us, if we nod to it, take a breath and let it ripple through us, then I think we can move forward, knowing the place from which we are moving.

I love the idea that Cass loves a photojournalist. A man who can capture the truth of events, but the truths in his own life are not always the ones that Cass wants. I’ve always felt that photographs, like writing, like any kind of art—and like life—shift in their truths. Can you talk about that please?

Good art has breathing room. And if there’s breathing room, the reader or the viewer has the space to see different things, different truths. What we are able to see often depends on knowledge and awareness, as well as the slant the artist brings to the work at hand. A photo in black and white can highlight a different truth than one in color. A close-up of a little girl’s dirt-smeared face is one truth, but when you zoom out to show her holding onto the hand of a man whose face is also smeared with dirt, that’s another one. And when you zoom out even more to see the burning car next to them, that’s another one still. Ethan doesn’t just snap the shutter; he waits, even though he usually has no idea what he’s waiting for. Cass loves that about Ethan, that he’s able to see what is there and also what could be there.

This is your debut! Tell us what that was like. What kind of writer are you? And has the success of this debut (you’ve got some stellar blurbs) impacted your next book?

It was exciting! But on the first day, I was so nervous about standing up in front of people and about being the center of attention. I had watched other writers do this for a long time and knew what doing a good job looked like. Which just made me more nervous. But I really wanted to enjoy these moments. I had worked so hard to get here. After my third event in 24 hours, I realized the only way I was going to enjoy readings and interviews was if I looked at the experiences as a way to learn more about myself and others. And the only way to do that was to stop trying to do as good a job as someone else and to focus on being myself and connecting with others.

As far as the reception of Tidal Flats, I started to say it has not at all impacted my next book, but then I remembered a thought I had a few weeks ago. Which was that now that I finally have a book published, I can care even less about writing “a bigger book,” which is what agents and editors were always asking me for. Which brings me to the final part of your question, and that’s that what I write about is day-to-day life, the domestic life that we, male and female, all lead after we walk in the door, after we get through with the flashy or not-flashy lives we lead in the public. And I’m a writer who loves language.

A lot of the story world is set in Afghanistan. What was your research like and what surprised you about it?

The most surprising thing happened before I even started writing the book. On the first of my monthly trips to Provincetown, when I was headed there to begin the new novel that would turn into Tidal Flats, I was thinking that one of the characters would have something to do with Vietnam or Afghanistan. On the flight, I ended up sitting next to Michael Sheridan, the Director of Community Supported Film, a Boston organization that trains local storytellers in conflicted and developing countries. He was on his way home after spending three months in Afghanistan.

Michael, in his exhausted state, spent the entire flight answering my questions and showing me his photos. He was nice enough to let me contact him throughout the time I was writing the novel. I was even able to talk to his wife. I also read newspaper articles, watched clips of Afghanistan, and searched the internet. If Ethan had been a point-of-view character, I believe I would have had to visit Afghanistan myself, but since Cass was learning about Afghanistan from Ethan, it seemed right that I learned about Afghanistan from Michael.

I was also mesmerized by the photos of Steve McCurry—the brilliant colors and the boldness and complexity of the images. These photos were inspiration throughout the years I was working on the novel. I pinned them up in my study and always had them in my carry-on.

The question of why I’m so obsessed about marriage. I think I just started yet another novel about it. In Rebecca Makkai’s The Great Believers, a character says, “You’ll never know anyone’s marriage but your own. And even then, you’ll only know half of it.” But through fiction, I can get on the other side of the closed door. And I want to know what’s happening there—in the evenings, in the mornings, in the kitchen. Behind that closed door is where I want to be.

Why did it take me so long to get a book published? And I don’t know. Maybe everything else I had ever done had been too easy, and the universe wanted to see how I would handle a difficult situation. Or maybe the universe wanted to know how much I wanted this. I was so close so many times. I had full manuscripts requested over and over again. I had editors love a novel only to pass it around a house without garnering enough support. Perhaps I spent too many years on the traditional publishing scenario: agent/NY publisher. But on the plus side, I feel more confident now as a writer than I would have if I’d published a book even five years ago. And what an adventure to publish my first book at the age of 62.