OCD is not what you probably think it is, and in BECAUSE WE ARE BAD, Lily Bailey talks about the misconceptions and her own triumphs with battling OCD, and so much more. 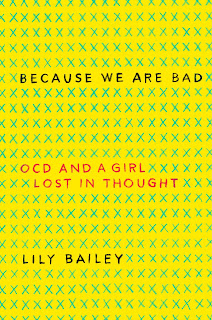 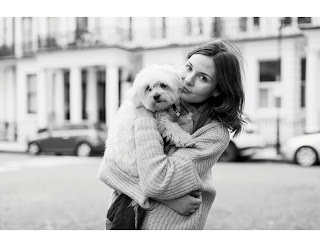 When a publicist first told me she had this great book on OCD (obsessive compulsive disorder), I thought, "Oh great! I have that!"

Lots of people I know throw the word OCD around, There is the run-of-the-mill obsessiveness, mild OCD, and then there is debilitating OCD, which is what model, journalist and memoir writer Lily Bailey has been grappling with and triumphing over. Her book BECAUSE WE ARE BAD is extraordinary, helpful, and yep, yep, yep, gorgeously written. A model and writer, she edited a news site and she writes features and fashion articles for local publications including the Richmond magazine and the Kingston magazine. Lily lives in London with her dog.

I am completely thrilled to host her on the blog. Thank you, Lily.

I always believe that every author is haunted somehow into writing their book. What was haunting you? What pushed you to write about your OCD now?

I was haunted by the years I lost because of the misconceptions around OCD. The average time taken to get help for OCD is 12 years, which is much longer than in any other mental health condition. One of the main reasons sufferers don’t seek help is that they don’t realize they have OCD. To have OCD all that is required is that you have obsessions (obsessive, unwanted intrusive thoughts), and compulsions (the action, physical or mental, that you take in response to these thoughts), and that they cause you significant distress.

When looked at in this way, you can see that OCD is a disorder that can be about just about anything. But when I was a child and teenager, all I (mistakenly) understood about OCD was that it pertained to being a vague perfectionist and liking things tidy and organized. My friends all used to phrase to mean this, and I’m sure I probably did too. My misunderstanding of OCD was so great that when I was diagnosed with it, I was sure the GP had gotten it wrong. I had lived with distressing thoughts that I was a bad person for as long as I could remember, and had to make mental lists of bad things I might have done. I believed I could kill people by thinking it, and that I had to perform compulsions to make sure they didn’t die. I had no name for what I was going through – I honestly thought if I told someone, I would go to jail or be sectioned. Every time we use the phrase ‘OCD’ in the wrong way, it takes someone like me that bit longer to know what we have and reach out for help.

This is a deeply courageous book. How difficult was this to write, or was it, freeing in some way?

People often ask me if it was therapeutic to write the book. The answer is no, it definitely wasn’t! Writing this book was a very solitary affair, and in many ways, it felt like a grieving process. As a child and teenager, I was so consumed by this stuff that I didn’t have time to be sad about my situation. I am much better now, and so there’s space for feelings I didn’t have before. As I immersed myself in writing about my past, I often felt upset about everything that had happened in ways I didn’t before. One thing I would say was ‘freeing’ is that I did worry what people would think if I wrote so openly about my life; all the weird thoughts I have had and the strange things I have been compelled to do in response. But the reception has been incredibly warm and supportive, and that is definitely liberating.

Tell me about how you write, and how your OCD factored into the process.

For me, one thing I always find with writing is that once I have the first sentence, everything else comes easily. When I worked as a journalist, it could take me a couple of hours to think of the opening line, but after that, the rest would write itself. So I have to sit quietly at my desk and wait for that to happen, and then ‘BAM!’, I’m off! I found this to be the way I wrote with literally every section of the book! One thing that was different about writing this book to anything I had done before was how entwined by routines became with it all. I used my routines from the past to recall what had been happening when I was small, and this was very different to anything I had written before.

I find the resisting of all routines really interesting, your need to say, “later, later,” so you can break the pattern.  What else—that may not be in the book—has helped you? What helps you now?

This is in the book, but I’ve found going to an OCD support group to be incredibly validating and affirming. I live with my dog, and he’s a real help. I don’t think you can underestimate the benefits of animal companionship for mental health. One thing I do now that I definitely didn’t do before is that when things do seem to be getting bad, I will actively make an effort to leave my room and socialise, because I know my routines feed off isolation. In the past I could hole up for weeks, and that definitely didn’t help my situation, even if it felt like the easier thing to do at the time.

“Maybe none of us are normal,” you write, and I think that’s true.  You also write: here is to the strong ones. The ones that never give up.” I actually think that might be the secret to living a life. Can you talk about this please?

At my weakest points with OCD, that drive to keep going has sometimes come from those around me rather than from within me, particularly from my mother. In life, we can’t always be strong for ourselves – sometimes we need others to carry us for a while. I think we all need at least one person in our lives who can do this for us. I’m very aware that unfortunately not everyone has this, and of how lucky I am. If you have a ‘strong one’, in your life, cherish them. It also doesn’t mean you can’t be the ‘strong one’. I am strong for other people in ways I could never be for myself.

What are you writing now?

I’m actually not writing anything at the moment. I didn’t used to believe in ‘writer’s block’. When I was a teenager I always had something to say about everything, and my naïve opinion was that writer’s block was just something you said to get out of writing. I definitely don’t believe that anymore! I found writing this book quite draining, and I haven’t written anything since. I hope to in time, but at the moment I need some space from it.

You asked me about writing with OCD, but you didn’t ask me what it’s like to read books when you have OCD. I’m an avid reader, but there have been points in my life where it has taken me months to read a book, or where I haven’t been able to read at all. I’ve actually come across lots of people with OCD who experience this. Potential reasons could include having to read the same line over and over until it ‘feels right’, or not being able to move onto the next page until you have retained every piece of information from the current page (I did both these things). In general, there’s just the fact that OCD is very distracting and draining, so it becomes hard to focus on the things you love, and for many people, that involves reading.

Being able to read properly again was one of the things that motivated me to work hard at beating OCD, because I missed it so much. Nowadays I can sit peacefully and enjoy reading a book, and I can’t tell you how much that means to me.