Danielle Younge-Ullman talks about EVERYTHING BEAUTIFUL IS NOT RUINED, the wilderness, mothers and daughters, more 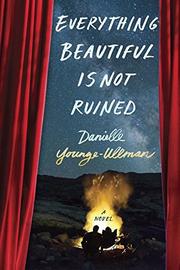 I first heard about Danielle Younge-Ullman's new novel, Everything Beautiful is Not Ruined from her agent, who spoke about it with such admiration that I instantly said, "Send it to me." And she was right. It's a fantastic book, both YA and for adult. About addiction, running away, and finding yourself even as you are your most lost, it's a dazzler. Danielle is  also the author of the adult novel, FALLING UNDER, and I am thrilled to have her here.


I always think that something must be haunting an author to jumpstart a book. What was haunting you?

I was haunted by:
-the wilderness trip I was forced to go on as a teenager, and how it had become a funny story that people in my family would ask me to trot out, that we would all laugh over…without anyone seeming to realize that underneath the funny story was actually a deeply miserable experience that nearly broke me, but that also transformed me
-artistic failure and/or loss. So many books have stories about gathering the courage to pursue your dreams to do something artistic, and this is, in part, one of those stories. But the flip side—the side of failure, loss, giving up—that is tremendously painful and very real for so many people. This is something I wanted to delve into via the character of Ingrid’s mother, Margot-Sophia.
-the experience of having seen loved ones go through depression

I love the juxtaposition of the wilderness and music, the mother and daughter. It all works seamlessly and powerfully.  What do you think being out in the world teaches us?

The strands that are Ingrid, her mother, and music, are so intertwined and entangled, and I think being out in the wilderness helps Ingrid start to disentangle some of those strands. And any time someone is forced outside their comfort zone there is a potential for extremes, for finding out where they are weakest, and where they may have surprising strength. In the context of this book, all the time out in the wilderness also forces Ingrid to really push herself, to reevaluate herself in relation to her fellow adventurers, and to reflect on her life and everything that has led her to this point, and start to come to grips with it.

I love the phrase “order on the outside will bring order to the inside.” Please, will you talk about this?

Feeling out of control of her circumstances is something Ingrid struggles with throughout the book. This is most obvious on her wilderness trip where she quickly loses all of her creature comforts, including access to toilets, privacy, clean clothing, a dry place to sleep, and mosquito-free food. This really puts her off balance, and she spends much of the trek trying to pull herself back together, physically and emotionally. Her increasingly filthy clothing becomes kind of a symbol of how out of control she feels, and how exposed.

Of course, Ingrid, she has it backwards—the order on the inside is what needs to come first, but it takes a lot—in fact it takes “order on the outside” being completely unachievable, to get her to that realization.

What kind of writer are you? How do you like to work? And what do you do when you hit a snag?

Well, I always feel like a mess of a writer, but somehow I get the job done. The beginning usually leaps into my head after an initial period of mulling and researching. I take it and run with it, and then at a certain point I have to stop because I don’t know what happens next. (I think this qualifies as a snag, but it’s also my process.) At that point, even though I HATE doing them, and never stick to it, I write some kind of outline. I follow that outline for a while, then something pulls me off course, and I let it, because that’s where the best, most unpredictable stuff often happens. After I’ve followed this uncharted path for a bit, I inevitably have to stop again (snag!) and re-outline. I just keep doing that until the book is done. I wish I could find a more ordered, efficient way to do it, but this seems to be my way.

I am always obsessing over seemingly unsolvable problems between people—especially people who love each other. Related to that, I am currently obsessed with conflict resolution. I don’t have very many tools for this myself, (unless you count being a referee between two kids). I’m good at preventing conflict or steering around it, and very skilled at pretending it doesn’t exist, but not great when it explodes in front of me. I just never learned what to do, and so I tend to freeze, and only later on do I realize what I could have/should have done or said. I don’t want my daughters to be this way—I want them to be able to face things head-on and work through them, and so I am a little bit obsessed about how to help them learn that skill, and how to teach it to them when I don’t have it. But, actually they’re pretty fierce and they have each other to practice on, so maybe I’m overthinking it.

As soon as I’ve sent this, or more likely on the day you post it, I will come up with something fantastic…and of course it will then be too late. But for now…I’ve got nothing. Thank you so much for reading the book and for having me on the sit
Posted by Caroline at 10:31 AM