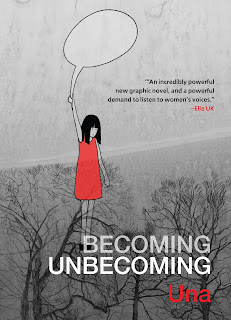 For this post, there is no discussion of the author other than she has produced an unsettling and tremendously important graphic novel about coming to terms with and surviving rape culture. It's an astonishing read and I am honored to promote it.

Reading this graphic novel was one of the most intense experience I've had. How did it feel writing and drawing it? Were there moments where you felt, “I can’t do this?” And if so, what kept you going.

The project started quite slowly so I had a lot of time to adjust. I started doodling fairly randomly and at first didn’t think of it as a book. As it turned into a project, I had a conversation with a feminist academic I knew to discuss why I might embark on a project like this and what the implications might be, and after this, somewhat reassured by her sage advice, I took the drawings to a comics forum in London, Laydeezedocomics, which incidentally also meets in the states, in Chicago and San Francisco. I got a great response from the Laydeezdocomics audience and began to work in earnest on the book. During the next few years I worked slowly, around my other commitments, so I was able to take lots of breaks when it felt too intense. I very much felt “I cant’ do this”from time to time, but mostly, it felt extremely liberating, and I grew in confidence as I worked.

I love the structure of the book and how you varied what we saw—and occasionally added a surprising splash of color. How did that come about?

The varying registers came about primarily because I was experimenting as I drew the book. I had never tried to make a novel length work before, so I learned to make a graphic novel by making one. That said, the way I work is always quite circular. An image might emerge as a result of sitting down to draw, or I might draw something I had already visualized or researched, or sometimes I begin with a line of text that somehow makes me think of  a picture, but however I start, the drawing comes from the writing, then the writing comes from the drawing, so it’s a process and the work evolves as it goes. This means it’s always changing. It’s always a response to or a development of what went before.

The color is something I wanted to have because it seemed to pierce the monochrome design in a way that reminded one that this was a story based in fact. There are only tiny moments of color, but they are all crucial to the story and the design. They are not merely decorative, always symbolic or based in memory. The Brownie uniform with the yellow tie, the green double decker bus, and the blue, speculative pencil for the last section of the book.

Your graphic novel isn’t just a pull-you-in-in-indictment of rape culture and how women are shamed. It’s also an exhilarating and powerful call to speak your truth, to refuse the shame, to act to change that culture. Can you speak about that please?

Thank you. I do think it’s important to speak your truth and also I’m interested specifically in the story telling form. Telling a personal story is a powerful thing, and cab be a way of making change. For women and girls who have survived sexual abuse, the phenomenon of being able to speak about this openly is relatively new. However, I think there are a lot of personal story novels around that need, a contest, but don’t have one. I wanted to make a kind of anti0misery novel, so that my story of personal trauma is set against a historical, cultural and political backdrop. The fact my own personal timeline fitted so neatly with the hunt for Peter Sutcliffe, the Yorkshire Ripper, from 1975 to 1981 m is a starting point for this backdrop and of course this particular history plays a significant role in the story, but there are also references to other cases of violence against women and girls and explorations of statistical information. For the Canada US edition, I drew three additional pages that explore cases familiar to North American readers.

Which of the incredible drawings and pages was the most powerful for you?

It’s hard to say really. I love drawing and I get completely lost in the process. I can draw for hours. Some of the drawing was made extremely quickly and some of it took ages, at least partly because I didn’t know what I was doing when I started and had to keep redrawing things. Only one of the drawings was upsetting to make. I won’t say which one. Some details are changed. The mohair/dream sequence is based on an actual recurring nightmare and it was a powerful moment for me to make that into a sequence. More generally, it sometimes takes me a while to get used to a drawing—any drawing, not just the ones that are in the book, so some of the pages that other people find powerful and drawings I didn’t ta first like. In fact there are a few pages in the book that I was hiding in a folder for a while out of embarrassment. Not because of the subject matter but because I thought they were awful. It was only when I returned to them a year or so that I could see their potential.

I’m obsessed with landscapes and simple forms of architecture because I’m researching for a new book. I’m constantly taking photographs and making sketches, or stopping suddenly in the middle of the street to examine cloud formations. I can’t tell you what the book is going to be about but I can tell you it will have more color in it.

What question didn't’ I ask that I should have.

That is such an interesting question, because I feel that no one ever asked me the right questions when I was young. If they had, I might have found the ability to speak about what was happening to me, and my life might have been very different. These days, though, I answer a lot of questions and I think yours have been rather good ones. I wouldn’t say anything is missing.