Jon Clinch talks about The Thief of Auschwitz, advance buzz, and reveals a knockout secret 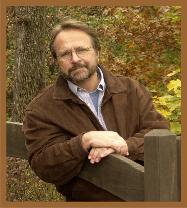 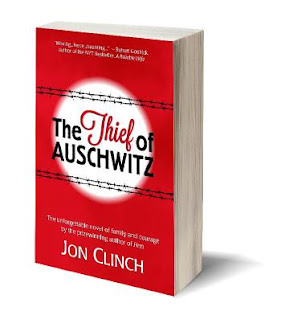 Jon Clinch has been an English teacher, folksinger, typeface designer, copywriter, and more. His first novel, Finn, was named an American Library Association Notable Book and was chosen as one of the year's best books by the Washington Post, The Chicago Tribune, and the Christian Science Monitor. It was also the winner of the Philadelphia Althenaeum Literary award and was shortlisted for the Sargent First Novel Prize. His next novel, Kings of the Earth, was named a Best Book of the Year by the Washington Post. His newest, the Thief of Auschwitz, is already racking up the raves.  I'm thrilled to have him here--and read on, because at the end, he delivers a secret.  Thanks so much, Jon.

So, tell us about the Thief of Auschwitz? How did the idea spark? What was the research like?

The idea came together from a number of things: family history, a couple of years' worth of reading, and one very particular dream.

The family history part is on my wife's side. There are no Auschwitz survivors—her grandparents on both sides left Europe before the war—but that doesn't mean that the memories and impressions aren't still there.  Wendy recalls watching her grandmother play cards with friends when she was little, and noticing the serial numbers tattooed on some those ladies' forearms. So in the novel, when a survivor ruminates on the popularity of tattooing these days—"I say why disfigure yourself in advance, when if you wait long enough someone will come along and do it for you?"—he's speaking for her.

The couple of years worth of reading part is a long period during which I read, for no reason I can put my finger on and most definitely without any intent of writing my own book, pretty much every first-person account of the death camps that there is. Elie Wiesel's Night, Viktor Frankl's Man's Search for Meaning, Miklos Nyiszli's Auschwitz: A Doctor's Eyewitness Account, and so forth. I also a good number of histories, including most notably Laurence Rees' very fine Auschwitz: A New History. I didn't read any fiction on the subject—never have—with the sole exception of a little-read collection called This Way For The Gas, Ladies and Gentlemen, by Tadeusz Borowski, himself a survivor of the camps.

The cumulative effect of all this was a realization that regardless of how hard I tried to look at the facts of the Holocaust, those very facts seemed bent on repelling my attention. It was all too much. It was all too big. It was all too awful. I began wondering if other people faced this same problem, and eventually I decided that the answer might be to quit looking at it directly for a while, and to try looking at it through the lens of fiction. I thought I'd work with the tools that fiction makes available—narrative, character, pacing, poetry—and try building a story that would keep people's attention on the stuff that's so hard to look at otherwise. If I succeeded, it would be a kindness to the people who went through the reality. It would be, for lack of a better word, a mitzvah.

As for the very particular dream, it was this: One morning, long before I started writing the book or even thinking abou it, I woke up with the title in my head. The Thief of Auschwitz. Just like that. And I knew that one day I'd have to write it.

What I love is that people can get it on their KOBO reader, so they can give back to their neighborhood even as they buy e-books.

I love it too. And that little mini Kobo reader is just the coolest thing, isn't it? From the very outset, I didn't want this book to be an Amazon-only thing. It's very easy for micropublishers to take that route. In fact, it's more than easy; Amazon offers certain very real benefits for making your books exclusive to their platform. But I said no, because I wanted it as widely and traditionally available as possible, not just for its own sake but for the sake of the independent booksellers who help keep our reading culture vital. Getting it up on Kobo was an important part of that.

On my website, I maintain a list of links to independent booksellers who've committed to stocking The Thief of Auschwitz in paper. The list is bound to be incomplete—I only know about stores that contact me and let me know they're stocking the book—but I really like having it there.

You've been featured in BookRiot as one of the 5 books to watch, and you're getting quite a buzz. Any advice for other self-published writers? Do you feel the lines are starting to blur?

The lines are blurring in a lot of places, but they're still pretty clear in the traditional book media—where a great many newspapers and magazines simply will not review books that come from someplace other than big publishing. So quite a few papers that have raved previously about Finn or Kings of the Earth won't even be mentioning The Thief of Auschwitz. So be it. There are some things that I can't change, and it's no use fretting over them.

The buzz is nice. (In the entire publishing process, the only thing I hired out was a four-month contract with a publicist, so I'm glad it's paying off.) But believe me, I'll never forget that the chief reason folks have been interested in learning about The Thief of Auschwitz is that they're familiar with my previous books. That's given me a leg up without which I don't know what might have happened.

Further on the self-publishing front, I should note that I recovered the rights to Kings of the Earth a month or so ago, and I've just released it in paperback. Random House did only a hardcover, so it's been a long time coming. (I also should mention that an audio version of The Thief of Auschwitz is on its way from Recorded Books. Which will make Thief, as my daughter says, "the least self-published self-published book ever.")

What's your writing life like? Anything about being a writer surprise (or disturb) you?

My writing life has been compromised lately, I can tell you that. Getting this book out into the world has taken everything I've got.

There's no question, though, that I'll get back to work on a new project soon. I typically write about five hours a day, and I work very meticulously. The truth is that I can't leave a single unlovely sentence behind, so I polish as I go and scrub up after myself before moving on. It's definitely the opposite of the "get something on the page and clean it up later" school.

For me, the biggest surprise of the serious writing life was learning how right Mark Twain was when he said that the tanks would run dry on a given project now and then, and he'd have to turn his attention to something else until they filled up. I have at least three partial drafts under way now, one of them nearly complete, but I'm not sure that the tanks are full enough to start on any one of them right now.

Other than my sales numbers, you mean? Nothing. There's no room for anything else.

Try this: How did I feel a few months back when my alter ego, Sam Winston, got an email out of the blue from a certain Caroline Leavitt, asking to interview him (me) for Leavitville?

You could have knocked me over. I was happy that folks were talking about Sam's novel What Came After, and doubly glad that you thought highly of it, and triply glad that it was selling nicely without my name attached (which turned out to be one very good reason I felt I could get away with publishing The Thief of Auschwitz on my own). But I couldn't keep up the charade, as you remember. So I wrote you back as myself, and confessed that Sam was my secret identity.

What a world, huh?

Hi there just wanted to give you a quick heads up. The
words in your content seem to be running off the screen in Opera.
I'm not sure if this is a formatting issue or something to do with web browser compatibility but I figured I'd post to let
you know. The design and style look great though!

Hope you get the issue solved soon. Thanks
Here is my web-site :: the truth teller show