John Kelly talks about The Graves Are Walking, the horrifying saga of the potato famine, research, and how the politics of the famine are disturbingly similar to what's going on with the Far Right in our country today

John Kelly's  The Graves Are Walking: The Great Famine and the Saga of the Irish People, has already been showered with praise from President Bill Clinton, Douglas Brinkley, Adam Hochschild, Amanda Foreman and more. Early reviews are equally spectacular. USA Today says, "Kelly brings the horror vividly and importantly back to life. The result is terrifying, edifying and empathetic. To read this book is to feel the Famine's chill."

New York University's chair of Irish Studies, Professor Joe Lee, one of the two or three most distinguished scholars of Irish history in the world, ranked this book on par with Cecil Woodham-Smith's The Great Hunger, which is the gold standard book on famine. And most importantly, even though the Irish Famine was an English-Irish catastrophe in the mid 19th Century, the philosophy behind it was shockingly similar to the economic ideas of our country's Far Right today. It is my incredible honor to have John Kelly on my blog today.


Can you talk about the title?

The title comes from William Butler Yeats's play, The Countess Cathleen. In the first scene, one of the characters says:


They say that now the land is famine struck
The graves are walking
I choose it as title for two reasons. One, It's a haunting image in and of itself, and  two, I thought it would give the reader a feel for what I was trying to do in the book, which was to convey a sense of what the famine looked like and felt like for the people who lived through it.
What was the research like? What surprised you?

The research was exhausting. Combined, I estimate I read about 8,000 letters, government documents, and contemporary newspaper accounts. However, the hardest part was the writing. How do you turn all that documentation into a compelling narrative history for the general reader? There were days I was so frustrated, I felt like taking out a restraining order against the book.

What surprised me is how sophisticated the international economy was in the 1840s. With nothing but letters and ships, merchants were able to guide an economy that stretched from the Ukraine to the Ohio Valley. It was a remarkable achievement.
What's obsessing you now and why?
The famine was caused by a kind of fundamentalist capitalism. The starving peasantry were required to pay for their own relief food because the British believed that giving away food for free would foster a culture of dependency, and private merchants were put in charge of feeding Ireland because the British also believed the free market could do the job more efficiently than any government agency. This fairy tale did not work out very well in reality. Given a monopoly on the food market, merchants ruthlessly raised prices until food became unaffordable to the peasantry, and, as a result, famine developed and claimed over a million lives
What's obsessing me now? The resurgence of fundamentalist capitalism There are a significant number of Americans who want to re-introduce this kind of tooth-and-claw capitalism to the United States. I think that is a grievous mistake.
What question didn't I ask that I should have?
Was the famine a deliberate act of British genocide, as some in Ireland continue to maintain?
I don't think it was. The British officials who oversaw famine relief were not Hitlers or Eichmans. They were wakeful-minded, God-fearing, and, by their own lights, well- intentioned men and that's what makes them so depressing.

If the famine had any enduring lesson to teach, it is about even the best can do, when the best loose their way and allow religion and political ideology to traduce reason and humanity.
It sounds a lot like today. 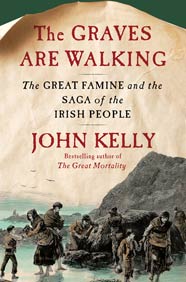 I like the helpful info you provide in your
articles. I'll bookmark your blog and check again here frequently. I'm quite certain I will learn
plenty of new stuff right here! Good luck for the next!