Val Frankel talks about Four of a Kind, Writing, Poker and more 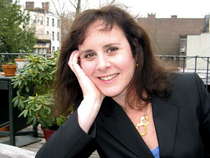 Valerie Frankel is quite frankly, a hoot. But not only is she smart and hilarious, she's brave and honest, and the kind of person you want to call at 4 in the morning if you're in trouble. (Don't worry, Val, I won't, I promise!) Her new novel, Four of a Kind, about modern women, mothering and New York friendships should be required reading.  I'm thrilled she's here on my blog.  Thanks, Val!
Lately, you’ve been writing some incredibly great memoirs (Thin is The New Happy, It's Hard Not to Hate You).  Four of a Kind is a return to fiction for you. Which do you prefer doing, and was it hard going back to the novel form?
What I’ve discovered is that one inspires and informs the other. My non-fiction (magazine essays, articles and memoirs) get my brain going in a certain direction, which benefits my novels. Fiction lets me explore relationships that, for whatever reason, I hadn’t let myself delve into too deeply in my personal life, which might trigger an essay idea or chapter in a memoir. It just goes round and round. So I need both. I guess I prefer fiction because writing a novel is like solving a puzzle without having all the pieces in front of you at the start. When it fits together at the end, it feels like a small miracle, as if my subconscious has been writing the story all along.
What I loved about Four of a Kind was the focus on how mothers become friends, even as they navigate the mine fields of New York private school, work while raising kids, and affairs of the heart. Do you think it's gotten easier for modern women?
Have things gotten easier for the modern woman? Definitely NOT! You have to be a genius parent, marathoner, top chef, fashionista, patient spouse, sexual dynamo, high earner, emotional savant, party thrower, AND the red hot center of a vibrant circle of friends. No man would be expected to be two or three of those things, and yet women feel like failures if we fall short in any category. But, God forbid all that pressure makes us unhappy, aka the greatest sin of the decade. Better add “Be happy!” to the list of demands we heap on ourselves. In Four of a Kind, I tried to dramatize the incredible pressure of being a modern woman, and to relieve it with humor and by giving my harried characters what none of them had time for previously or thought possible: unexpected true friendship.
I have to ask--when did you start playing poker yourself?  How did the poker game come to be such an integral part of the novel?
I wanted to give the characters a reason to sit at a table together for hours besides eating, drinking and talking. I’ve found in my own life that when the hands are busy, the mind’s guard comes down. So I put playing cards in their hands. Since they are frugal moms, I decided that they wouldn’t bet with money. A woman’s currency is her story, the details of her private life. So I had my characters play for each other’s secrets. I sorted out the rules of Brooklyn Hold ‘Em—when/how the players reveal their secrets—and the novel just wrote itself from there.
I had to learn poker along with my characters. We had a similar learning curve: steep. For research, I went to Hurrah’s in Atlantic City and played Texas Hold ‘Em against real players for real money. It was frankly terrifying. I lost all my money in just a few hands. Never again! I’d rather play for secrets anytime.
What's your writing process like?
My greatest gift as a writer is discipline. I sit down, and don’t get up until I’ve hit my word count for the day. The pages might be crap, but they'll lead somewhere eventually. Twice, I had to write a hundred bad pages to get to what should have been page one. Ideally, I’d be able to figure things out in bed or on vacation. But my brain functions more efficiently when my fingers are on the keyboard. The result of habitual  action. When I sit down to write, it’s time to get serious and focus completely on what I’m doing.
What's obsessing you now?
My daughter is a junior in high school, and I’ve become obsessively going online to look up various colleges’ accepted student SAT and GPA scores. This is NOT HEALTHY. My daughter is not a number. And yet, I can’t stop myself. Culturally, I'm among the millions obsessed with Downtown Abbey. I love how the plot pushes to the point where the stakes might be too high. And then it pulls back to be a near miss. I want dramatic tension, but not tragedy. For my recent birthday, I bought my first iphone, and now I’m obsessed by Angry Birds, a time-wasting computer game. Professionally, I’m obsessed with my new novel. Since I write often about mothers and daughters as a subplot, I thought it’d be interesting to make that sacred relationship—several versions of it—the core of the story (with some romance and mystery throw in for good measure).
Posted by Caroline at 2:16 PM

This sounds like a wonderful novel -- can't wait to read it! I love the description of fiction and nonfiction inspiring and informing each other... very cool! As for your obsessions, I can relate: my daughter is in college now, and I remember how easy it was to get caught up in looking everything up -- YIKES -- and I love Angry Birds (my daughter introduced me to it!). And now I'm looking forward to your next novel too about mothers & daughters!