Caroline Preston talks about The Scrapbook of Frankie Pratt 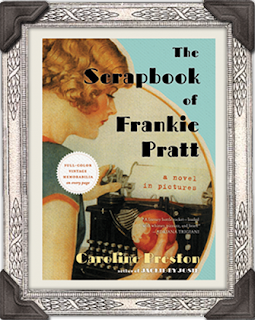 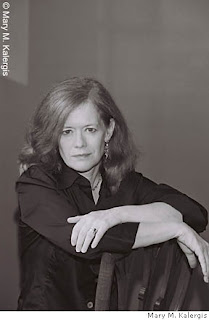 I first met Caroline Preston at a literary party and was instantly charmed by both her--and her work. Preston is the author of  Jackie by Josie, a New York Times Notable Book of the Year, Lucy Crocker 2.0, and Gatsby’s Girl, which chronicles F. Scott Fitzgerald’s first girlfriend who was the model for Daisy Buchanan. In The Scrapbook of Frankie Pratt, she's delved into her own collection of vintage ephemera to create a novel in the unique form of a scrapbook, creating a book that is gorgeous, enchantingly original and so much fun to read. I'm so honored to have Caroline here!  Thank you, Caroline.


What gave you the idea of writing a novel in pictures?

I like to say the idea of making a scrapbook novel was 40 years in the making.  The house where I grew up (in Lake Forest, Illinois) had a great old attic jammed full of trunks and boxes of 1920’s stuff that had belonged to my grandmother.  Flapper dresses, coils of her long hair which she’d bobbed in 1924.  And of course big thick scrapbooks filled with dance cards, letters from old boyfriends, ocean liner tickets. I can’t tell you how many hours I spent up there rooting around and daydreaming.
My first three novels were what I guess you’d call “conventional” format—i.e. words-- but I always used photographs and visual material in my research.  My third novel Gatsby’s Girl was inspired by the meticulous scrapbook F. Scott Fitzgerald kept about his first love, Ginevra King—her first note to him, her handkerchief, and a newspaper clipping about her marriage to another man.  Later he would turn the story of his unrequited crush into The Great Gatsby.
When I was casting around for the idea for my fourth novel, I wanted to create something that was as visual and powerful as a scrapbook.  And then I had a crazy idea—why not make a novel that WAS a scrapbook. Not a digital scrapbook, but a real one made of real stuff that I cut up with scissors and pasted together with glue.
How did you go about writing it? Did the photos, images, etc. come first and fashion themselves into a story, or did you have the story in mind and search for the images to support it?
I started with my character, Frankie Pratt, and the outlines of her story, which was set in the 1920’s.  I imagined an 18-year-old girl who wanted to become a writer and her journey which would take her to Vassar, Greenwich Village, and Paris.
Then I hunted down and bought all the things that a girl like Frankie Pratt would glue in her scrapbook—postcards, movie tickets, Vassar report cards, menus, sheet music, fashion spreads,  popular magazines, a New York subway map, a Paris guidebook, and of course love letters.  In all, I collected over 600 pieces of vintage 1920’s ephemera.
I found that Frankie’s story changed and evolved as I found surprising things—for example an original book cover for The Sun Also Rises. The book caused a huge fuss in Paris when it came out in 1926 because everyone recognized the characters, and she would been right there to bear witness.
So much of the wonderful ephemera in the book tells the story, but I also deeply admired the text--Frankie's voice is so spot on, and her character, revealed through her scrapbook is so alive. How did you find her voice?
Frankie’s story is told through her typed scrapbook captions.  I was inspired by the style I found in so many of the 1920’s scrapbooks I looked at, including Scott and Zelda Fitzgerald’s—breezy, funny, self-ironic, but also serious.  Most vintage scrapbooks do feel very alive because people kept them to record the happiest and most exciting times of their lives—going to college, getting married, having a baby, going off to war.  And of course, what could be more alive than Greenwich Village and Paris in the 1920’s!
So much of the pleasure of the book is in the design, which looks and feels like a genuine scrapbook. Did you work with a designer or was this all your own considerable--and genius-- creativity?
I designed the entire book, with the exception of the cover.  Even I’m pretty surprised by that fact, because I have no training in graphic or book design.  I was liberated to try designing a book because it was in the format of a scrapbook, which is by definition laid out and constructed by amateurs.On each page, I imagined what Frankie would have chosen to glue in and how she would have put it together.  Through the course of the book, 1920-1928, her design sense gets more sophisticated as she’s exposed to things like Art Deco and Cubism.
The fantastic book designer at Ecco, Mary Speaker, went over my final pages and made it into a finished book.  Ecco did a beautiful job with the book production—the paper quality, the cover, the photography, and the four-color printing are all amazing.
What's obsessing you now?
I have started in on my next scrapbook novel, this one kept by a bride during her first year of marriage 1959-1960.  I like to think of it as a prequel to Mad Men.  My favorite finds so far:  a 1959 Brides magazine, the Betty Crocker Bride’s Cookbook, a 1960 sex manual, View-Master slides, a set of bride and groom paper ...
Posted by Caroline at 7:25 AM

I Agree with these beautiful pendants, these are slices from an agate geode with lots of sparkling druze crystals, The slice is has an attached bail. Inside the slice is a dangling natural point.
Regards:- Sandeep Sharma
for scrapbooking