Gary Buslik talks about A Rotten Person Travels the Caribbean 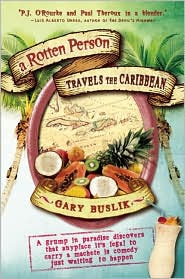 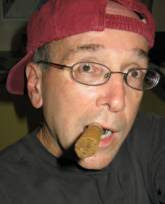 First, there's the hilarious title: A Rotten Person Travels the Caribbean: A Grump in Paradise Discovers That Anyplace it's Legal to Carry a Machete is Comedy Just Waiting to Happen. Buslik has written one of the friskiest, funniest travel memoir I've ever read--and by the way, I've met him at a reading of mine and he isn't a grump at all.

Okay, so what makes you a rotten person and a grump? (Besides being hilariously funny.)

The truth is, I hate traveling. What happened was, one night shortly after we met, when my future wife Annie and I finished making love, she sighed, "There must be more to life than this." So I suggested getting married and honeymooning in Branson, Missouri, to see Andy Williams. Instead, she bought a travel magazine, pointed to a picture of a hammock strung between palm trees, and said, "Buy it for me." She meant the Caribbean, not the hammock, because that's how the woman thinks. I was just starting out then, so I couldn't afford to purchase the entire region, but not wanting her to think I was a piker, off we went on a one-weeker to Jamaica, which she planned on converting to a large shoe rack.

Because I was still too polite to ask why her suitcase weighed as much as Luciano Pavarotti, I schlepped what I assumed was an Italian tenor to Montego Bay, suffering a collapsed spinal disk and permanently reduced libido. By the time we got our hotel room, and I hauled her bags onto the bed, and she unpacked her iron, folding ironing board, ghetto-blaster with built-in record turntable, diesel-operated TV, hair-curler steaming contraption, electric toothbrush, power nail buffer, pneumatic jackhammer, kerosene lantern, and Black & Decker variable-speed electric drill with carbide-tipped bit set, I was in too much pain to ask the obvious—so, sorry, I can't tell you why she had packed a hair curler. As for the power tools, I just assume she was afraid we would get caught in a hurricane and have to personally rebuild our hotel. Anyhow, I was in too much pain to perform my groomly duty and had to settle for propping myself up in bed and watching a cricket match, which has rules designed to make Americans feel stupid, so to this day I blame the Caribbean for my crummy mood and my detesting opera.

I know this is supposed to be a travel book but it’s also a really sweet and funny look at your relationship with your wife Annie. You banter and lovingly insult one another, and it has the same tone as your travels—you grump about things, but it’s clear you are having a blast. Did you know she was going to be such a big part of the book when you wrote it?

I did know it, and I'll tell you why. When we first met, Annie used to edit my manuscripts, until she developed carpal tunnel syndrome from crossing out all my trite metaphors and doltish clichés, so ten years ago she gave up the whole enterprise in a keen sense of self-preservation and, it must be said, disgust. At first I was miffed, but it actually turned out liberating for me too. Because to protect her mental health (such as it is) she now makes a studious effort never to read my writing, I'm able to portray her any way I want with virtual impunity*, putting her in every chapter and saying things I would never say in person—for fear she'd file for divorce and in public records reveal that I polish my cat's toenails.

* I say "virtual impunity" because you can bet your bottom dollar her buttinsky sister will call and say, "Did you read what Gary wrote about your sex life?" (Again, such as it is.) Annie won't confront me about it because she knows I'll just reply, "Well, you shouldn't have stopped editing, and what's good for the goose is good for the gander, so don't upset the apple cart. And, besides, life is like a stormy sea."

So what’s the worst place you’ve ever been and why? And what’s your idea of a dream vacation?

My idea of a dream destination is any place where they serve macaroni and cheese, show Celebrity Apprentice in English (although, frankly, Donnie Jr. is starting to get on my nerves), and the taxi drivers aren't so inbred they all have the same last name and can't remember where they left the brake pedal. As for the Caribbean, I'm fond of the Dutch islands, such as St. Maarten, Curacao, and Aruba. The Dutch run their tourism-related businesses cleanly and efficiently, in order to make up for the fact that you have to dig up tulip bulbs every fall and replant them in the spring. Also, the Dutch are funnier than other people when they're drunk. They climb palm trees for no apparent reason and fall on their heads. I suspect this has something to do with tulip bulbs.

I have to ask. One of your rave blurbs is from an inmate counselor at a state penitentiary. There’s got to be a story behind that, right?

There is indeed a great story behind that, involving mass murderers John Wayne Gacy, Jeffrey Dahmer, a prisoner who still does a dead-ringer Cher impersonation, a catnip mouse, and Keith Olbermann. Unfortunately I can't tell you what it is until I get to know you better.

You also teach—does that help your writing or hurt it or a little of both?

A few years ago I taught undergraduate creative writing and failed miserably because, in the name of truth and caring about my students, I told them that if they really, really wanted to be writers they should get as far away from college as humanly possible. I reminded them—and myself, to really answer your question—that we're all in the entertainment, not the genius, business. My superiors in the English Department, believing that entertainment is anathema to academia, were horrified at this pronouncement and, as punishment (and object lesson, I suppose), asked me to teach Shakespeare instead—obviously being too dense to see the irony.

I'm not sure teaching Shakespeare either helps or hurts my own writing. It would be easy to get creatively intimidated, knowing that he wrote more than thirty dramatic masterpieces and 154 of the world's finest poems before the age of forty. Longhand. Quill. Dipping and blotting, blotting and dipping. Candlelight. Oh, and that little matter of bubonic plague, right outside. On the other hand, for me at least, it's encouraging to know that he was apparently having fun. No, we writers can't all be geniuses, but we can all have fun. Do you have fun writing?

What are you working on now? (the ubiquitous question)

I'm having fun writing a novel. I'll finish my first draft in about six weeks, put it aside for a month, and revise and polish it before the end of the summer. In the meantime, I keep limber writing shorter stuff. I have a piece coming out next month in Best Travel Writing 2011(Travelers' Tales) and other story coming out in an anthology over the summer. During my month hiatus from my novel I'll probably write another short story or two. Oh, and I'm researching a novel that I want to write next year. I keep going. I write every day and don't wait for inspiration. I suspect Shakespeare would want it that way.

A. What aspects of the Caribbean do I find particularly interesting, from an historical perspective?

What a brilliant question. The West Indies has a colorful and storied history, beginning with Columbus, when he first set foot in the Bahamas, believing he had discovered Kansas and, later, Lord Nelson beating the bejeezus out of the French, which is why today we eat at Arthur Treacher's Fish and Chips and not Madame Curie's Plutonium and Chips. For me, being Jewish, I'm most intrigued by the number of synagogues that all claim to be the first in the Western Hemisphere. Almost every island has one, which you can visit for normally five dollars, but for you, three-fifty. On several islands the synagogues themselves are gone, but we know there must have been thriving pre-Columbian Hebrew communities there because you can still see plaques on ancient volcanic boulders that say gift of max and esther fleischman. Thank you for asking.

St. Maarten, French? Not unless it's spelled Bonaire.

I'm married to Dutchman and no matter how many times he falls on his head, he jumps up and plants a tulip. (But then, we live in Iowa where there are no palm trees.)

It's great that you are getting ideas from this article as well as from our dialogue made at this time.

Here is my web page :: payday loans no faxing