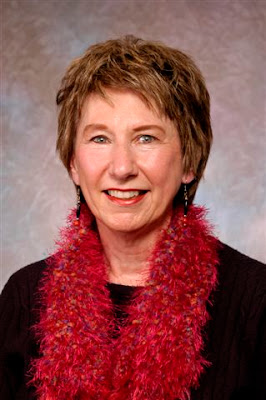 As anyone who knows me knows, I'm almost always knitting something. So when I heard from a writer who combined knitting with mysteries...well, how could I resist? So while I cast on for a winter hat for my son, I'm turning over the blog to Maggie. Thank you, Maggie! 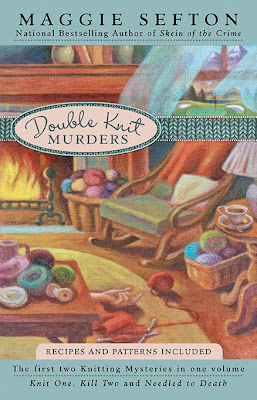 I want to thank Caroline for inviting me to post on her blog this week. The latest in my Berkley Prime Crime Knitting Mysteries (Eighth in the series), SKEIN OF THE CRIME, came out this past June, so it’s not really new. But I do have a new release coming out this November 2nd: a tradepaper edition of the first two mysteries in the series---KNIT ONE, KILL TWO & NEEDLED TO DEATH---entitled DOUBLE KNIT MURDERS.

The series is set in fictional Fort Connor, Colorado, and is based entirely on the charming college town an hour north of Denver---Fort Collins, where I have lived since 1988. We’re 5000+ feet above sea level (like Denver) and enjoy wonderful views of the Front Range of the Rocky Mountains, or foothills as the locals call them. We’ve also got weather to die for, which spoils us rotten for returning to the humid areas of the country where some of us grew up and lived. I love, love my “home” area of Northern Virginia, across the Potomac River from Washington, DC, but the summer temps are deadly and the winter cold feels frigid to me now. Living with lower humidity is nice. . .very nice.

People always want to know how I came to write a “knitting mystery.” Well, I hadn’t planned to. In 2002, I had just finished my first amateur sleuth mystery (set in the real Fort Collins) and had a real estate agent as the sleuth. DYING TO SELL went on to sell to Five Star Mysteries. However, in early 2003 I was doing some magazine articles for the first time and was interviewing people who’d lost their jobs during that earlier recession. I’d not done nonfiction before and was enjoying it. Most of my writing career (more than a decade) had been spent writing historical novels set in varying periods of history---medievals, 1890s America, American Frontier, French swashbuckler. I’d written more than a million words of historical fiction before I wrote the first mystery. In fact, I was first published with my western historical romance, ABILENE GAMBLE, in 1995.

So, the magazine articles were a departure for me. And while I didn’t sell any articles, they did open the door for the knitting mysteries. In May 2003, I had the chance to do an article which involved interviewing knitters. Now. . .I didn’t knit at all, but I had friends who did. When I interviewed them, they all said I had to visit the “wonderful” Fort Collins knit shop, LAMBSPUN. They described it in glowing terms. So, I called the shop and they said to drop by any Tuesday evening when there were bunches of knitters all around the table. So I did. But, when I walked into the foyer of the vintage beige stucco, red-tile roofed Spanish Colonial, something happened---

I fell right down the rabbit hole---just like Alice---into a Wonderland of color and texture and pure sensuality. I’d never seen fibers like that before. They had cotton candy hanging on the wall. I spent fifteen minutes touching everything in sight before going into the larger room where a long library table was surrounded by people knitting, crocheting, or spinning. Weavers worked their looms in adjoining rooms. Everyone was so friendly and welcoming, I had no problem doing interviews. But what struck me was the atmosphere around that table, the warmth and camaraderie. It was seductive. So much so that I found myself returning every Tuesday evening because. . .it was so much fun.

After five months of enjoying the warmth of the Lambspun knitting table and learning to knit by the seat of my pants, Kelly Flynn “walked onstage” in my head. That’s how my characters have appeared ever since I was a kid. They just “show up.” And they bring their personalities and their stories with them. I recognized it as another amateur sleuth mystery and started writing the scenes that were spinning in front of my eyes.

Little did I know, those knitting mysteries would go on to become national bestsellers from the very first release of KNIT ONE, KILL TWO in June 2005. For that, I continue to thank the readers. They’re the ones who make you a bestseller. We novelists simply want to get our characters “out there” and pray that readers like them.

I hope you enjoy meeting Kelly & her friends (in their early 30s) as they kick back and relax and knit around the table. That’s where they talk about their jobs, their relationships, and. . .help Kelly find clues when she starts poking around in murders. “Sleuthing” her friends and other shop regulars (of all ages) call it. Not that the police ask for her help, mind you. They don’t. But that’s never stopped Kelly. And, she has a pretty good track record at solving crimes. So, grab a cup of coffee at Pete’s café in the back of the shop and drop by and say “hi” sometime.