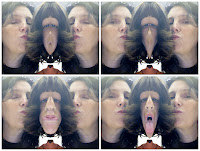 This dandy photo is a series that Max and I made at the incredible huge and wonderful and giant Mac store in Soho. It's some feature called Mirror Stretch, I believe, and we played with it for about a half hour, before moving on. What's most strange, beside the double Carolines is that Max's head is floating over his neck with white space in between. Actually, there IS no neck. And he looks nothing like himself, except for the major hair.

I've had a PC for a zillion years, though I worked on a Mac at my horrible Columbia House job (get a thousand videos for a penny...Bruce Willis back and better then ever, and a boss who chided me for calling films about ponies Horse Tales, because he said no one would get it.) I love my Dell, I really do. It's just the Dell service people I loathe. They never really help. They are all based in India, which is outsourcing which I don't approve of, and they always say, "Reinstall Windows."

The Mac store is so cool. Two huge floors and a theater (a theater!) where they give demonstrations and classes. It's open 24 hours a day, so you could mosey in at four in the morning and hang out if you wanted. Their help is called the Genius bar and the people who help you geniuses. Plus the Macs are so cool. We spent all our time playing on the big Macs, then on the lap tops, then on the iphones, then back to the laptops. one guy was at the same machine for all three hours, talking to himself.


And also, I asked if I could at least get a mac keyboard, and they said they wouldn't work with my PC. Is this true? I asked about six different people, just in case they were hiding info on me and they all said no.

Sigh. I got my new dell last year, but I think Jeff's going to get a Mac laptop.

So who has a PC and who has a Dell and who has a Mac and who has used both? (Original Mac owners tend to be very "nothing else will do-ish"....I know aprt of this is just my yearning for new technology, whatever it is, but stil...
Posted by Caroline at 6:47 PM

I was PC/Microsoft for 30 years. I got so tired of XP crashing my machine I switched 5 years ago... havnen't looked back. Everything (software) in now interchangable and the Intel chip makes things seamless if you want to run windows on your mac (but why would you?).

PCs are great.. but Mac is better in all areas... I didn't drink the Kool Aid... this is just 25 years of technology experience talking and 20 or those years being on a PC.

Now I want a Mac more than ever, but I just bought my Dell last year and unless I can find someone who wants to buy it for a good price, I can't. GRRRRR, now I have to wait! Jeeze, does someone want to buy me one? I'll be your slave for six months!

Just to add to the resounding Chorus...MAC MAC MAC!!!!! I love mine. I used to use a PC and my family uses Dell...but they all envy my mac-love. Since they brought out their first blueberry clamshell i-books, I have been a convert. In fact I still have that clamshell...and it still works in a pinch...although being almost 10 years old...it is slow.

Here's what else is great about MAC:
-i-web...I run my own website and update it myself whenever I want.

-Garage band...I record my voice auditions at home and e-mail them to my agent.

All that said, buy the extra warranty...my laptop died after my three year warranty was up, but because I had the extra year, I got an entirely new hard drive, logic board etc, for no extra cost.